In praise of the handmade 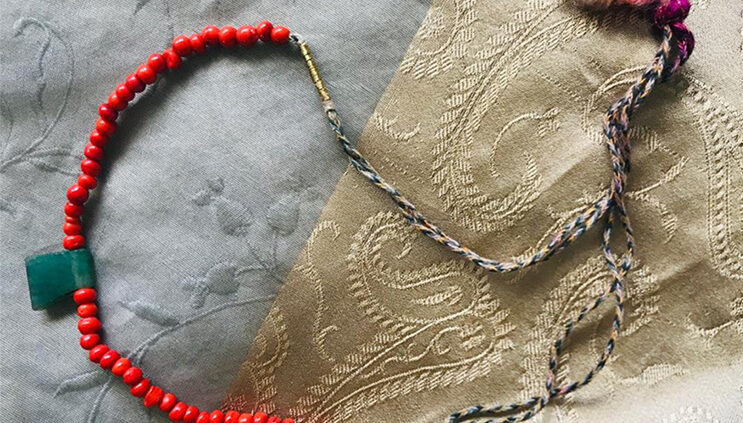 There are a few things in life that are as endearing to me as those that are handmade. I like that no two handmade things are ever the same, that they also often have stories around them and that they are so richly varied. They may also carry fragrances. Like the aromas of special ceremonial meals. Or the scent of a freshly knitted sweater.

I am drawn to flea markets wherever I go, because one is sure to find little treasures there that have the deep imprint of their creators. They resonate with an honesty, having been crafted with care, thoughtfulness and love. Like a long hand-written letter, that speaks of the time, thought and probable stillness that went through the words that were chosen to run on the paper.

One such treasure is what my paternal grandfather, Rishabh Chandra Jain, made for me many years ago when I had just finished college. A small neckpiece that he fashioned from some loose beads and a piece of stone that no one was using and that simply lay in an insignificant box in the house for a long time.

The necklace is not just beautiful, it is also symbolic to me. It speaks to me as much of the grace, strength and humility that my grandfather embodied as of the sense of unity that we as a large family felt under his giant umbrella of care at all times wherever we may have been. The grand old man of our house was always fixing things that didn’t work. Somehow, I never imagined though that he could work on a piece of jewellery! But at 70, he sat down to fix the ancient beads with his old, weathered hands, tying them securely in a thick thread with a knot to adjust to varying lengths around the neck, taking care even to give them a contemporary look for his grand-daughter. He made a present of it to me without much ceremony/ado.

My grandfather was born in 1919 in Rajgarh, a place in Dhar district of MP. He only studied till Metric, 10th standard and spent the rest of his life educating himself by reading voraciously in a way that he acquired a great depth of knowledge in any subject he touched. His first job with the Customs and Excise, Department of Jhabua, Madhya Pradesh, involved apprehending people involved in making illicit liquor in the dense forests of MP. He was brave, fearless and carried out his duties with utmost diligence and honesty. In fact it was his diligence, honesty and clear work ethics that brought him to newer positions and different, important roles in his work life, including his move to the cities of Kanpur, Calcutta and then Delhi when he joined a Birla group Insurance company.

I’m a photographer and so was he though not a professional one, but he was always recording, documenting life and the people he encountered in it, not just his family members or friends. I have fond memories of pouring over tons of photo books he made all his life but a large majority of them were tragically gone after his death, either eaten away by termites in the ancestral house where he lived post retirement or lost by others who borrowed them.

He gave me this necklace when I had just started my first job as a lecturer in Delhi University in the year 2000. As I’ve written he just gave it to me one day saying I might like to wear it, not much ado. I was so moved I had tears. My father tells me the beads in the necklace probably came from Benares on one of their trips there and were then forgotten about till bauji picked them up and decided to make a necklace out of them for his granddaughter. The beads are orange in colour, not very smooth to touch, and are strung together in an old two layered thread. I can adjust it to varying lengths and like to wear it as often as I can.

He and I also shared a special relationship through letters. He was always writing in those old yellow postcards, letters to everyone in the family and also friends, whether it was congratulatory notes on any achievement, or matters of concern, or advice or announcements of importance. We also used to discuss a lot of subjects together as he was interested in religion, ethics, philosophy and medicine. And I was pursuing my masters and M.Phil in Sociology, there was a lot coming home with me and he was always keen to know what I was learning. We never saw him sitting idle, whiling away his time. TV watching was also very limited and mostly to keep my grandmother company.

The necklace enjoys a place of prominence in my jewellery closet today. I like the unevenness of the beads, the simple lack of finish. It is a keepsake that connects me, and roots me to life in a positive, reassuring way.