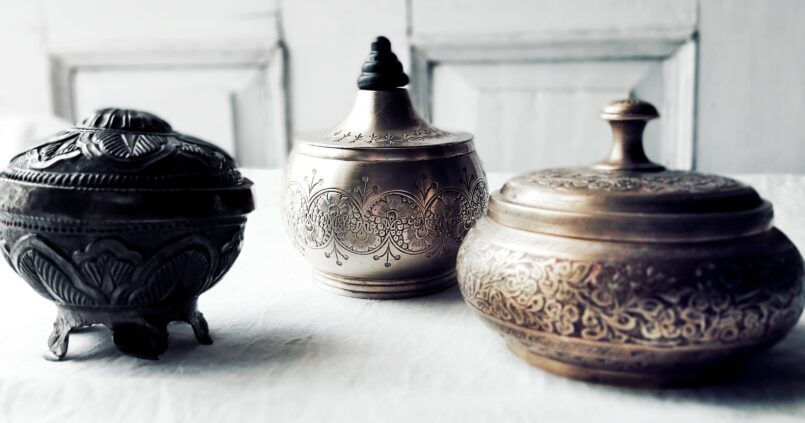 My home is also home to three Vintage Dusting Powder Boxes. These vintage dusting powder boxes have been in the family from around the 1940s when my maternal grandparents got married. They belonged to my grandmother, Bani Bhattacharya, who brought these from her maiden home in Maldah, West Bengal. She shifted to Birbhum for a short period after her marriage, until finally she settled in Asansol with her family. Asansol is where we still live. It has been 33 years that my grandmother has passed away.

Most of her objects of daily use are carefully preserved by my mother. The one on the extreme left in the photograph above is made out of silver and has a special place in my mother’s closet; the other two are made out of brass and we still use these regularly. They are all ornate and for
me objets d’art that occupy a place of pride in the feminine demesne of the family. I know, if they had tongues, they would have tales to tell, tales about my grandmother, my mother & her sister and me.

Make-up gained a new momentum in the Victorian era in England. Powders and creams and lipstick and rouge came into vogue. Dusting powder boxes must have come into being back then. Victorian ladies were told and taught the importance of maintaining a beautiful appearance exclusively for the pleasure of men, and especially so during difficult times. Face powder was made of scented and lightly coloured starch. Powdered milk of magnesia, rice powder, French chalk and Venetian talc were also used. In 1877, Henry Tetlow discovered that dried and ground zinc oxide made an excellent pure white powder which did not grey when exposed to gas, candle and coal fumes. Pure white powder lightened the complexion. Colour tinted powders covered up blemishes. Powder was cheap and easy to make or buy and
easily passed as a medicine rather than face paint. It was applied by placing a scoop into a cotton bag and dabbing it onto the skin. Around the turn of the century, a rabbit’s foot became widely used as a powder brush which in turn was situated inside a powder box.

India being an English colony, no doubt, there existed a porousness between the two cultures. And hence, supposedly, dusting powder boxes found their way into the Indian way of life. Albeit, into the upper middle class, educated in the English ways, before it perforated into the other strata of Indian society. The popularity has lasted in India, especially because of the widespread use of talcum powder as a coolant in the country where summer months arenextensive and typified by sweltering heat.

This powder box is still in use. My mother, Krishna Mukherjee, keeps it on her dresser and uses it every day. It has a lovely bowl shape that makes it easy to use and hold a puff. I find the engraving on the brass stunning. Floral & intricate with a border, the design is a charm. Leaves specked with three-petaled flowers trailing along the entire circumference form the
design. The lid of the powder box is equally detailed & intricate and is attached to an elongated knob with a circular head, also engraved, to make lifting of the lid easy. Whereas the outside of the powder box is so meticulously detailed, the interior is plain & shiny smooth. It is a heavy piece of art.

This brass powder box currently belongs to me. I empty the plastic talcum powder container into this ornate piece and puff myself whenever I need to. Humid summers mean this little piece is used daily now. I don’t quite like the deep bowl shape of this powder box. But its depth means it can hold quite a quantity of talcum powder which means less work for me. It would be hateful to have to empty the plastic containers every other day. I love the floral embossed design though. It has the similar three-petaled flower pattern as the previous powder box. But these flowers are large, prominent and unlike in the design of the previous one, are not lost in an array of trailing leaves; rather the intricate circular design of the background helps the flowers stand out. At the base of each flower is a pair of tiny paisleys. And the entire design is enclosed within a couple of continuous arches bordered by three button-shaped flowers in turn. The lid has an elongated and grooved ebony knob and a simple border running around it.

This powder case is a prized possession not because it is a silver one but because it exclusively belonged to my grandmother, whom I never had the chance to meet. I know her only through her things, her few photographs and my mother’s memories. My mother keeps this silver powder box in her closet with a few other things that belonged to my grandmother. In spite of what this ornate silver powder box might have to say, its owner was a simple, down-to-earth lady who did not care much for make-up or for owning material things. How someone so careless about her own beauty came to own not one but three powder boxes escapes my mother and me today. I love the layered leafy design and the slightly dome shaped structure of the lid. It stands on five legs that are curved at the bottom and gives the
powder box a dainty look. The reflection of the design on the surface can be seen and felt on the inside of the case and the lid. And somehow the silver, darkened with age, gives it a special charm.

And now, unveil’d, the toilet stands display’d,
Each silver vase in mystic order laid.
First, rob’d in white, the nymph intent adores
With head uncover’d, the cosmetic pow’rs.
A heav’nly image in the glass appears,
To that she bends, to that her eyes she rears;
Th’ inferior priestess, at her altar’s side,
Trembling, begins the sacred rites of pride.
Unnumber’d treasures ope at, and here
The various off’rings of the world appear;
From each she nicely culls with curious toil,
And decks the goddess with the glitt’ring spoil.
This casket India’s glowing gems unlocks,
And all Arabia breathes from yonder box.
The tortoise here and elephant unite,
Transform’d to combs, the speckled and the white.
Here files of pins extend their shining rows,
Puffs, powders, patches, bibles, billet-doux.
Now awful beauty puts on all its arms;
The fair each moment rises in her charms,
Repairs her smiles, awakens ev’ry grace,
And calls forth all the wonders of her face;
Sees by degrees a purer blush arise,
And keener lightnings quicken in her eyes.
The busy Sylphs surround their darling care;
These set the head, and those divide the hair,
Some fold the sleeve, whilst others plait the gown;
And Betty’s prais’d for labours not her own.

Pope is sharp and witty and while his lines might make one laugh at the corner of one’s mouth, what is bothersome is his condescending view of the heroine at her vanity in the satiric scene meant to expose the shallow and narcissistic nature of Belinda. Because what just might be true of the vain aristocratic individual, Belinda, is also a strong patriarchal blow at the feminine. A woman at her vanity is not about foolish, narcissistic self-worship as patriarchy would have you believe. A woman at her dresser is an intimate, private moment; a moment when she is comfortable in her skin, a moment that is in its essence entirely feminine. Powder puff boxes are a part of that intimacy. It is not about cosmetic powers, but
an assistance in exhibition of a woman’s control over her own body in her own private space.