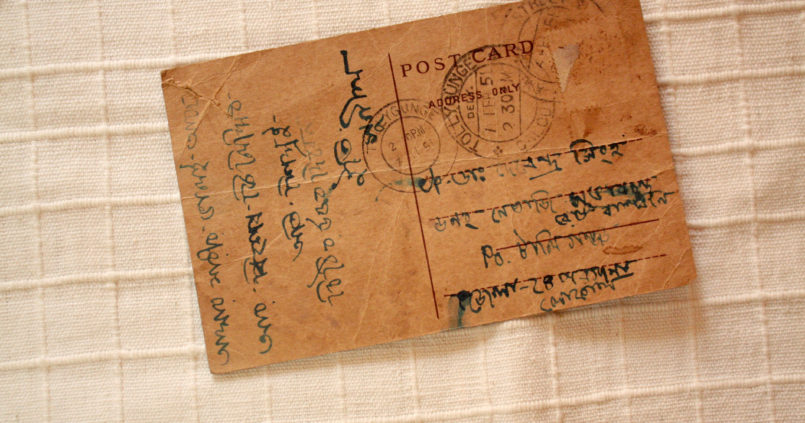 
My father, Sunil Chandra Sanyal, was born in 1941 in Susang Duragpur Village, Mymesingh zila, which is a part of present day Bangladesh. During the Partition of India in 1947, there had been no communal riots in their district and so the family had continued to live peacefully with no intentions of migration. Baba was 7 years old when, in 1948, his mother decided to take the children and drop them off safely to Calcutta. Still hopeful that one day the children would be able to come back to the village, his parents stayed in East Bengal for a year longer. But isolated instances of rioting began occurring in the districts around them and finally, in their village too, communal gangs would often ransack houses and cause ruckus. The village became unsafe for young women, who were being abduct or taken advantage of, and so finally, the couple decided to leave in 1949. In the middle of the night, raat ke andhere mein, the couple fled from their hometown to the city of Shillong by bullock cart, from where they got into a train to Assam and finally, to Calcutta.

Now I can tell that their journey was driven purely by the instinctive need for survival, as the years that followed were full of sadness and lament for a homeland that had been lost to them. Unable to set up themselves quickly in their new city of Calcutta, they stayed with relatives. My father stayed with his mousi (maternal aunt) in Tollygunge, and his parents stayed with his mama (maternal uncle) in Bansdroni. Unable to bear the loss of his home and land, my great-grandfather, Dineschandra Sanyal, passed away in 1952. One year after baba wrote him a letter, asking him to send across his certificates so he can finally enrol into a school in Calcutta.

It is written on an ordinary brown postcard and in blue ink, we can see the hesitant handwriting of my father, all of 10 years at the time! Words are written in a large, animated size and strung together in small sentences, complete with cross-outs and spelling errors. There are blots, where the ink would have run, and careless folds that have set into the paper over the years. The front of the postcard bears a round stamp in black ink, the words TOLLYGUNGE, 7 February 51′ clearly legible. The body of the letter, when translated from the Bangla, reads along the lines of-

“Respected Father, I want to get admitted to school over here so I need the certificates. Please get them as soon as you can. Without them, I will not get admission in a school here in Kolkata….How are you? I am fine!”

I was first shown this letter when I was about 14 years old. I couldn’t believe how young Baba was when he wrote it, just a few years younger than I had been at the time. I was able to relate and could almost feel his innocence when I held it in my hands. The letters were so big and cute and the stress on the pen was intentional and evident. And the emotion, what really got to me was the emotion behind the simple note, a struggle to get admission in school in a new city. Nearly seven decades have passed since he wrote this letter, but every time I read it, the feeling it exudes is still a wonderfully comforting innocence.