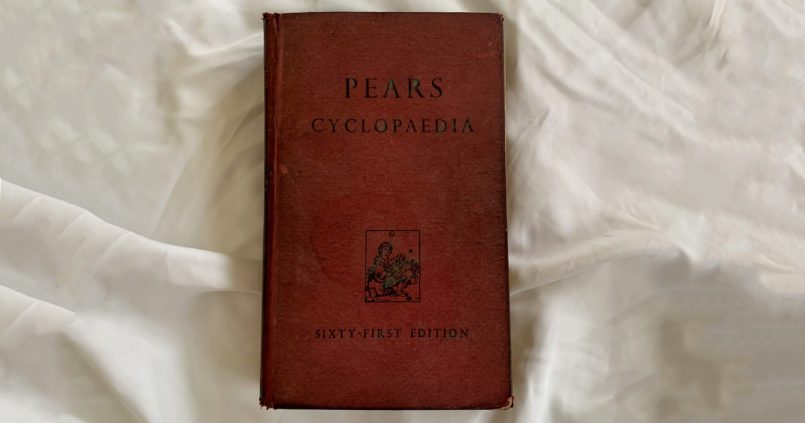 This story is partly about the object at hand, and partly about my great-grandfather’s life and his forefathers. My grandmother, Geeta Chatterjee (née, Mukherjee), was born in Jaipur, in 1932. At the age of 16, she was married to Biswa Prasad Chatterjee, and moved to Kolkata to begin her marital life.  As a result, her formal education remained incomplete. However, that did not prevent her from pursuing knowledge through other efforts, whether it be engaging in her children’s education, reading books or solving the crossword puzzles in the newspapers. Many times, I saw her referring to a thick book bound in a maroon cloth cover, as she sat down to solve her crosswords.

Today, if we are to look for information on any topic, we immediately run a search on Google to find thousands of results awaiting us. But, for the generations preceding ours, the go-to source of information was to flip the pages of relevant books, and in my grandmother’s case, it was the maroon-covered Pears Cyclopaedia’s 61st edition, which she had inherited from her father, Bimal Mukherjee.

The Pears Cyclopaedia was first published in 1897, and continued to be printed annually, until 2017. One of the reasons why the publication was discontinued was due to a lack of demand for such a reference book in the digital era. It contains a vast amount of information; it is a cyclopaedia, after all! A timeline of history, an English dictionary, a set of recipes, instructions on how to set up a kitchen, advice on beauty and grooming, and several other such intriguing topics. Sold for a shilling back when it was first published, the cyclopaedia was originally referred to as “A Mass of Curious and Useful Information about Things that everyone Ought to know in Commerce, History, Science, Religion, Literature and other Topics of Ordinary Conversation.” (Flood, 2017).

Although the object had been lying around our house ever since I was born, it was only recently that I glanced through its pages and was quite intrigued. The cyclopaedia, published in 1952, is by all means, outdated, but perhaps that is what makes it fascinating to me. The year is 1952, which means King George VI was still the King of England (he died that year, in February), and Queen Elizabeth II had not yet been crowned. It was interesting to come across what I considered history, portrayed as events unfolding in the present. In fact, it often felt like I was reading a newspaper from the 1950s, looking at things through the perspective of my great-grandfather.

For instance, maps in the cyclopaedia showed the existence of East Pakistan. Large swathes of Northern Africa marked as French territory. If we look at the photographs carefully, we are able to see red lines under the names of places: marks made by my great-grandfather. These markings invoked within me a feeling similar to Harry Potter’s when he found the Half-Blood Prince’s copy of ‘Advanced Potion Making’ with various markings and notes scribbled in the margins! Perhaps this would be the case with any second-hand book, but chancing upon these red markings and underlines, I knew I was peeking into my great-grandfather’s world.

My great-grandfather, Bimal Mukherjee, was a civil servant, an avid reader and from what I’ve heard, had a room full of books. Many of these were shipped from England, which is the only logical explanation for how the cyclopaedia ended up in his possession. When he passed away in 1980, abandoning this vast collection, a serious question arose about what was to be done with all the books. My mother happened to visit Jaipur that year, and she was asked by her grandmother to take whatever she wanted. And in this way, the Pears Cyclopaedia made its way to our home, along with other books by Romila Thapar, AJP Taylor and Percival Spear.

While my fascination with the cyclopaedia lies on one side, on another, I began questioning what a Bengali household was doing in Jaipur, Rajasthan. How did they end up there, make it their home for generations, only to be eventually scattered across different parts of India – Kolkata, Delhi, Chennai, Hyderabad, Mumbai. While my grandmother was the eldest of ten children, the youngest, Prabal Mukherjee, lived in Chennai, and I happened to visit him this year.

He produced a fascinating document: a family chart of the Mukherjee family. It was humongous, to say the least, and its surface had been laminated. Reading from the document was another task – handwritten in Bengali, with lines stretching from one end of the page to almost its middle: no one writes that way anymore! In one corner of the chart, I found my grandmother’s name and mention of her marriage to my grandfather, along with our former address on Rashbehari Avenue in Kolkata.

Like the Cyclopaedia, this family tree turned out to be yet another object that gave me insight into the life of my ancestors. The story of how the family arrived in Jaipur begins with Rao Bahadur Kanti Chandra Mukherjee (1835-1901), my great-great grandfather, who was educated at the Free Church Institute at Chinsura, Bengal, and then travelled to Rajasthan in search of opportunities. His life and achievements have been recorded in several books – Kanti Chandra or ‘Chunder’ as many would have spelt it at the time, was the Prime Minister of the Jaipur Court, and his efforts towards the creation of the Jaipur Economic and Industrial Museum in 1887 have been mentioned by an individual named Tillotson. He also finds an entry in Buckland’s ‘Dictionary of Indian Biography’, which is reproduced below:

Educated at the Free Church Institution, Chinsura. Taught in his village in the 24 Parganas, and at Jonai, Hughli. Appointed Principal of the College at Jaipur, Rajputana. Attended the Maharaja’s darbar and appointed Member of his Council. Became the foremost man in Jaipur, and Prime Minister to successive Maharajas. Received a jagir and became a noble of the State. Organised the Jaipur Transport Corps for Imperial Service. Helped the Maharaja to initiate the Famine Trust Fund. The Jaipur State greatly prospered under his management. Made Rao Bahadur and C.I.E. for his services. Member of the Famine Commission, 1899. Died at Nagpur, 1901.

Kanti Chandra’s son, Ishan Chandra Mukherjee was popularly known as Hathi Babu. To commemorate his father’s role in the Nagpur Famine Commission, he established a Chhatri, a monument with a dome. It was constructed in 1901, the year of Kanti Chandra’s death in front of Mokshadam in Nagpur. The inscription on the monument quotes the former Indian Viceroy, Lord Curzon’s words to describe Kanti Chandra as ‘the finest type of public servant’. On my quest for coming back to answers regarding the past, I also learned that there is a road named after Hathibabu, called ‘Hathibabu Marg’, in Jaipur. Now, it is not everyday that a person gets to learn that a road in a major Indian city is named after their ancestor!

So, that is how it went: Kanti Chandra held the answer to my questions, for it was due to his efforts and circumstances, the family was based in Jaipur! Both his son, Ishan Chandra and later grandson, Bimal, continued to thrive in Jaipur, and it was only with my grandmother’s marriage that she came to be based in Kolkata, to stay until her last days, which is how I have come to discover this past in the first place.

And to now come back to the story of the Cyclopaedia, which lies in front of me, ready to feed me with information – some obsolete, but most still relevant. It speaks to me in a language that I alone understand, acting as a shovel with which to excavate my genealogy to reveal the history of my forefathers and the landscape that they inhabited. This landscape was certainly politically different: some might say that my forefathers enjoyed the honours bestowed upon them by their colonial masters, while others may consider the trajectory of their lives to be fascinating. But the legacies we inherit will not always be flawless, for human lives are often a product of their situation and surroundings. Notheless, I do believe that all kinds of stories deserve to be told, and I am glad I to have found a story from my family’s past:  The story of a migrant in the British Raj, a chhatri in Nagpur, and a world that can only exist in our imaginations, long gone but not forgotten. The story prompted and unearthed by a codex called a Cyclopaedia.